Since forming in 2020, 4 Horseman Music, a first-of-its-kind collective of songwriter-producer greats, have racked up a handful No. 1 rock hits for everyone from Halestorm to Bad Wolves.

Songwriters and producers Blair Daly, Marti Frederiksen, Scott Stevens and Zac Maloy all recall the moment a poolside hang turned into a business opportunity — and one that has led to a succession of top charting hits.

In early 2020, the four friends — all of whom were at the end of their respective publishing deals — formed 4 Horsemen Music, a songwriting collective of sorts. By that summer, each of the four members signed publishing deals with Round Hill Music. Since then (between August 2020 and May 2002), they have collectively scored four No. 1 hits on Billboard’s Mainstream Rock Airplay chart, with a handful more making it into the top 10.

“We hatched this plan of, ‘Wouldn’t it be cool if the four of us, who all are active songwriters in country and rock, had our own little thing?’” recalls Maloy. “There’s not many songwriting collectives, [let alone] a rock songwriting team in 2022,” adds Daly. “We’re trying to keep alive the art of rock and roll music, that’s why we combined forces.”

Daly says that while the four felt “a bit of fire beneath this” idea from the start (they’ve written over 100 songs in the past year alone, noting that their group chat is active daily) that it was crucial to find the right partner “who felt equally as passionate about rock music.” And there was arguably no better match than Round Hill founder Josh Gruss.

Round Hill A&R Adam Mott (who has 20 years of artist management experience) recalls the first time he heard about the 4 Horsemen from an industry friend, around the same time that Josh Gruss had launched the rock label Black Hill Records (through the company’s label arm Round Hill Records). “It just seemed like all the pieces of the puzzle fit perfectly,” says Mott.

Adds Daly: “Rock is a little club of misfits at this point, you know? We’re the outcasts, and to find an incredibly successful businessman, publisher, whom we all respect and admire, who’s also a rocker [himself] was like, ‘Hell yeah.’ We were super lucky to find that in Josh.” (True to the pandemic, none of the 4 Horseman members met Gruss until after their deals were signed).

On their own, each of the four horsemen have had decades of success in the rock and country lanes: Daly’s hits include Uncle Kraker’s “Smile,” Kelly Clarkson “People Like Us,” Kip Moore’s “Beer Money” and Rascal Flatts’ “Stand.” Maloy, a member of rock band The Nixons, has scored No. 1 songs across Billboard charts with Shinedown (“Atlas Falls”), Lilith Czar (“Anarchy”) and Carrie Underwood (“Temporary Home”); Frederiksen is a longtime collaborator with Aerosmith, which has led to credits for Def Leppard, Mick Jagger, Faith Hill and more; and Stevens has scored a slew of radio hits, having written and produced for artists such as Shinedown, American Authors, Halestorm and Chris Daughtry.

Yet, looking ahead, Mott reveals his vision for 4 Horsemen Music is to expand beyond country and rock, taking a crack at alternative and later even diving into pop. Frederiksen recently told him he’d love to work on a song with Harry Styles, while Daly applauds artists like Olivia Rodrigo and Machine Gun Kelly for introducing rock music to a younger fan base and helping bring drums and guitars back to pop radio. “I’m all about it,” he says. “I love seeing the cycles.”

Now, two years into having signed 4 Horseman Music, Mott says “a lot of people are coming to me [versus him pitching the collective], but that was through years of building the brand … A lot of my old manager friends will say, ‘You have the Max Martin[s] of rock right now. You need a top 10 single? Your guys can usually provide that.’”

Below, the collective breaks down how three of its biggest current hits came together.

When Scott Stevens first met Halestorm’s Lzzy Hale, he was pitching her the 53rd song she had heard for the band’s upcoming album. “I’ve seen over the last 20 years writers in hell, trying to find the song that everyone’s hoping for, waiting for,” says Marti Frederiksen. Adds Stevens: “The frustration she probably was going through at that time…  We get to help alleviate that.” Stevens has worked with Hale for a decade, estimating that they’ve notched nearly 10 No. 1 hits together — and while he suggested the 4 Horsemen come into the process this time around, Hale wanted to keep the process more intimate.

She told Stevens she wanted a song for the moment when she has her audience in the palm of her hands: “I said, ‘Oh, you want a church of rock and roll anthem.’” The two finished the melody, lyrics and vocals within a few days. By the time it landed in the hands of co-producer Nick Raskulinecz, Stevens recalls him saying: “That’s a No. 1. It’s gonna be a hit.” The song arrived in February, and by June had climbed to the top of the Mainstream Rock Airplay chart; As Zac Maloy says, “Trust me, the first phone calls Scott got on that day were from all of us.”

Upon reflection, Blair Daly isn’t sure if he ever told Bad Wolves what inspired “If Tomorrow Never Comes,” which he says stemmed from “being a new father at my age, at any age… I had the fear of, ‘What if I don’t wake up tomorrow? What will [my daughter] do? Will she remember me?’” He says the chorus, which came together quickly, started off softer and sweeter before morphing into a slightly darker and heavier narrative: “I said to Bad Wolves’ [drummer] John [Boecklin], ‘If you like this concept, let’s make it a Bad Wolf song.’ And that’s when he came with the more edgy, grittier verses about somebody who had passed away, looking down on their life as they’re lying on a table after they flatlined and thinking all these things.” Daly recalls how the band was Stevens then demoed and produced the song that turned into what it is today: a No. 2 hit on Mainstream Rock Airplay.

“Rest In Peace” started as a fast, bluesy rock song before Stevens suggested it didn’t sound right. Daly says “it marinated longer than most songs,” until a few months later when Stevens declared: “I think I figured out what’s wrong with it … it’s gotta be a little more spooky.” He played the new version — a mid-tempo, heavier piano-based take — for Daly over the phone, telling him it sounded like a perfect song for Dorothy, despite the fact none of the 4 Horsemen had ever even met her before. And so, Stevens recorded the demo (a task he jokingly says he always gets stuck doing), which her team immediately loved. Soon enough, Dorothy was in his studio recording her own vocals and injecting the track with her own personality. “She breathed new life into that song I could never imagine,” Daly raves.

When she came to perform in Nashville earlier this year, Daly and Maloy finally got to meet her in person — with the former calling her show “a religious experience.” Considering Frederiksen helped Stevens with the production, “Rest In Peace” became the highest-charting hit to date that the 4 Horsemen as a team had a hand in (it hits a new No. 2 peak on Mainstream Rock Airplay this week) – and as a result, Stevens says Dorothy now wants to record the entirety of her next record with the team. “That’s exactly it,” he says. “That’s [the goal] in its essence.” 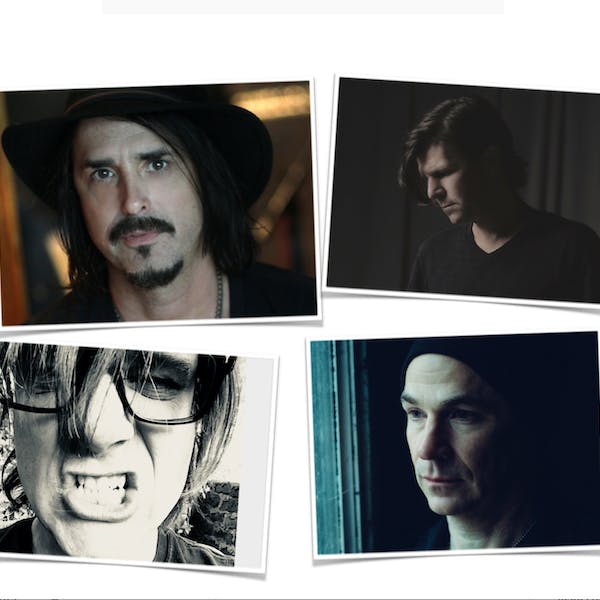