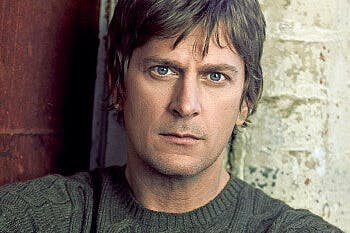 Life, love, and music eventually arrive full circle. We reach the place where we began not only wiser, but with more wonder for the bearing of the past on the future. Three-time GRAMMY® award winner Rob Thomas progresses by recognizing his roots. In fact, the singer, songwriter, multi-instrumentalist, and Matchbox Twenty co-founder picks up a thread from his formative years and weaves a bold and bright new chapter on his fourth solo offering, Chip Tooth Smile (Emblem/Atlantic Records].

Fittingly, the experience earned from over two decades as one of modern music’s preeminent songwriter and frontmen empowers him to do so.

“I’ve always been a radio kid,” he explains. “I grew up listening to all of this music from the late seventies and early eighties in the car with my mom. I knew every lyric to every song on the air. There’s a sensibility to the way I write that’s been informed by eighties songwriters, especially. I feel like I grow each year. Hopefully, that trend will continue until I am ready to stop.

He most certainly does on Chip Tooth Smile. In fact, the record represents a confluence of firsts for the New York-based artist. After three tour packed summers, he took the summer of 2018 off and commenced writing for what would become his latest album. Three years removed since 2015’s The Great Unknown, he amassed a career high 60 ideas to be whittled down into the next body of work. All along, there would be no choice but to work with longtime friend Butch Walker behind-the-board as producer. It notably marked his first collaboration outside of producers Matt Serletic and Steve Lillywhite, but one he admits to “manifesting.”

“I told everybody that I was going to make a record with Butch before I even called him,” he laughs. “When I finally did talk to him, I said, ‘Listen, you have to do this, because I told everyone you’re doing it!’”

The duo primarily collaborated “across the miles” with Thomas recording vocals in his New York studio and Walker cutting drums, guitars, keys, bass, and synth “like a band” out of his Santa Monica studio. The musicians would congregate on either coast for one week at a time often collaborating out of the Atlantic Records studio. Walker and Thomas bonded over a mutual fascination with eighties staples as the producer pushed the singer towards a “live vocal energy.”

“Butch wanted my voice to sound like it sounds live,” continues Thomas. “There’s a rawness to the delivery. “Nothing’s overly produced. We really bonded over the same music. It was everything from Cutting Crew to Cyndi Lauper, INXS, and Depeche Mode. This was two buddies working together, but the sound is all Butch. He sets up everything in the room the way a band would play, and he jumps from instrument to instrument. It sounds like a group. I think he’s got multiple personalities anyway, so he plays each instrument differently,” Thomas grins.

This vibrant sonic backdrop encouraged Thomas to push himself as a lyricist and a writer. First and foremost, he embraces his role as a storyteller.

“I don’t want to discount that I’ve been doing this for twenty-plus years and make myself sound younger,” he elaborates. “I’ve earned all of the years I’ve grown, so I wanted to put those into song. I don’t mind sounding a little more mature. By that, I mean sounding like a grown up. I was writing about getting older. I was writing about experiences I’ve been through that I could’ve only been through by getting older, by facing mortality, by having a son, by having a family, and by having responsibilities that I didn’t have when I first started out. It’s very autobiographical about where I’m at now and where I’m headed.”

As such, the first single “One Less Day (Dying Young)” illustrates his evolution. Backed by a propulsive riff, steady beat, sparse keys, and subtle Celtic flavor, Thomas admits from the intro, “I’m not afraid of getting older…I’m one less day from dying young.” This bold and brave statement sets the tone for the 11 tracks to follow.

“To me, it encapsulates everything you’re about to hear on the rest of this record,” he affirms. “We lost some people who were very close to us during the past few years. It made us take stock of a lot of things. When you’re twenty-years-old, you simultaneously think you’re going to live forever, but you also don’t think you’re going to make it past twenty-five. As you get older, you realize getting older is a privilege, and it’s not afforded to everyone—especially when you lose friends around you. That’s why ‘One Less Day’ became really important to me. It’s funny because I actually had a conversation on tour with Adam Duritz about how we’re too old to die young. I ran into the other room and wrote the chorus.”

Elsewhere, “Timeless” lives up to its title with a heartfelt chant, “All this shit we’re going through. Nothing compares to you. Our love is timeless” before calling out classics. He namechecks everything from “Sister Christian” to “Girls Just Wanna Have Fun”—culled from a text dialogue with his wife about their favorite tunes from the era. “The Man To Hold Water” pairs delicately fingerpicked guitar with intimate verses, while “I Love It” hinges on boisterous and bluesy riffing and a warbling synth solo. “Early In The Morning” confronts racial insensitivity and urges social consciousness over organic percussion. Produced by Benny Blanco, “We Were Beautiful” projects youthful nostalgia through a lens of experience. “Breathe Out” bookends Chip Tooth Smile with a heartfelt denouement regarding, “everything the record talks about—growing up, getting older, pacing yourself, and realizing tomorrow is another day…and a gift.”

Throughout his illustrious career, Thomas has consistently made history. He received a rare Diamond Award from the RIAA for Matchbox Twenty’s 12-times platinum debut Yourself or Someone Like You. His 2005 platinum solo debut, Something to Be, became “the first album by a male artist from a rock or pop group to debut at #1 on the Billboard Top 200 since the chart debuted.” Its follow-up cradlesong cemented him as “the only male artist with multiple #1 hits at Adult 40,” while he tied P!nk for “most #1s by a solo artist in the chart’s history.” Not to mention, he teamed up with Santana for 1999’s “Smooth,” which not only earned three GRAMMY® Awards, but also held the #1 spot on the Billboard Hot 100 for 12 weeks and spent 58 total weeks on the chart. The song emerged as #1 song in Billboard’s Top Hot 100 Rock Songs” chart history and “#2 Hot 100 Song of All-Time”. “Smooth” was also declared the all-time #1 song on Billboard’s “Adult Pop Songs” radio airplay chart, the #1 song of the Rock Era based on chart performance on Billboard’s Hot 100 and recently declared to still hold the spot as the second most successful song of all time by Billboard.

Thomas became the first-ever recipient of the prestigious Songwriters Hall of Fame Hal David Starlight Award created to recognize a composer in the early years of his or her career that has already made a lasting impact. Moreover, he garnered numerous BMI and ASCAP awards and would be crowned “Songwriter of the Year” by both Billboard and BMI. Total record sales for his output exceed 80 million worldwide. Additionally, his commitment to philanthropy remains as staunch as his commitment to music. After being involved in many charitable endeavors, he and his wife, Marisol, started SIDEWALK ANGELS FOUNDATION which provides critically needed funds and support to no-kill animal shelters across the country that help to fight for the rights and fair treatment of those that have no voice.”

In the end, Thomas comes full circle and delivers a record both befitting of his reputation and indicative of his future. “I write a lot of songs about the human condition, how people interact with each other, and how we deal with our environments,” he leaves off. “I want people to take them and attach them to their lives. I hope they possibly speak to what they’re going through, and I’m always thankful they’re still listening,” he smiles.